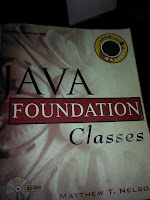 I started out as a Swing developer and I have the Java Foundation Classes book to prove it. But Swing never really caught on and so I started working with C# and WPF. Windows Presentation Foundation (WPF) isn't what you'd expect for making desktop applications. It kinda feels like making web applications since you "describe" the UI via a XML-like language called XAML. This isn't really a bad thing just different.

I could go on about WPF being different but at the end of the day the foundation of a desktop app is the layout it's built upon. This is what I've learned.

Posted by Jaypax Ginete at 7:08 AM